Aim: The aim of the study was to evaluate the shaping ability of four nickel-titanium systems (iRaCe, ProTaper Next, Wave One, and TF) in simulated double-curved (S-shaped) root canals. Materials and methods: This study was conducted using simulated S-shaped root canals (n = 40). The specimens were divided into four experimental groups (n = 10 each). Each group was prepared using one of the following NiTi systems: iRaCe, ProTaper Next, Wave One, and TF. The canals were injected with black ink before instrumentation, and a series of photographs of each canal was saved to a computer using a set protocol. The canals were reinjected using red ink postoperatively to define their outlines, and images were taken in the same standardized manner. Photoshop software was used to superimpose pre- and postinstrumentation images in two different layers. Canal transportation was evaluated at five positions from the apical end (D1, D2, D3, D5, and D7) by measuring the amount of removed resin using ImageJ Software. The data were analyzed using SPSS ver. 20.0. Statistical significance was set at P < 0.05. Results: There were no significant differences (P > 0.05) in shaping time (in seconds) among the NiTi systems, and there were no significant differences (P > 0.05) in canal transportation values among the systems at D1, D2, D3, D5, and D7 among the NiTi systems. Conclusion: The iRaCe, ProTaper Next, Wave One, and TF systems preserved the original shape of the double-curved (S-shaped) canal with minimum root canal transportation. These systems produced satisfactory root canal instrumentation in S-shaped canals. 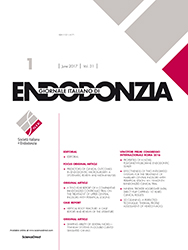 Most read articles by the same author(s)

FOR AUTHORS
FOR REVIEWERS
INDEXING IN: